Journey back in time from the comfort of your own home as you experience the wonder of Hershey Felder’s 2020-21 season. Streamed live from Italy, celebrated performer Hershey Felder will bring famous composers to life through profound storytelling and showcase their works with stunning music.

All purchases include the livestream performance and one full additional week of on-demand viewing. 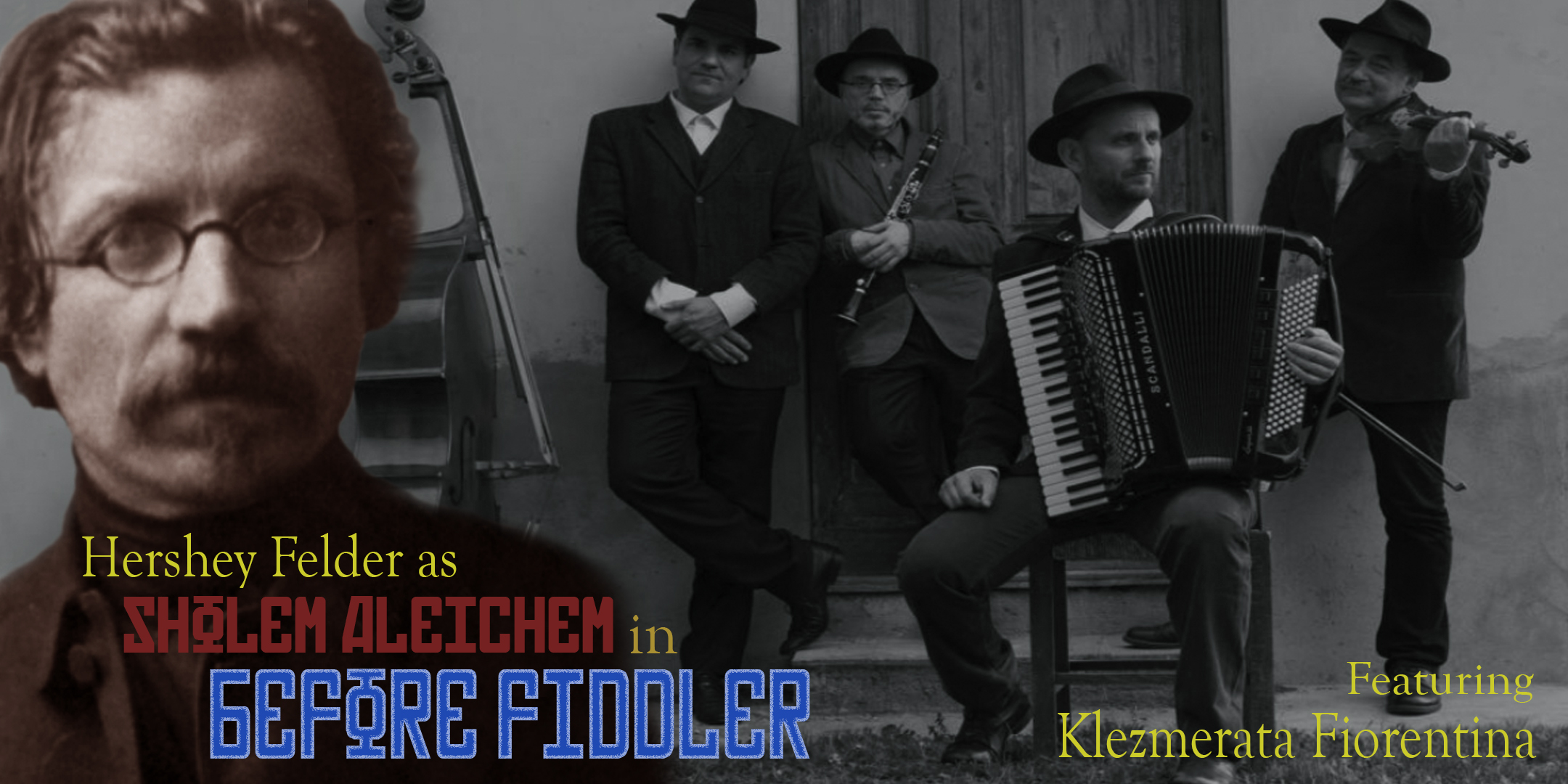 Decades before the beloved musical Fiddler on the Roof first delighted worldwide audiences, there was Sholem Aleichem and his beloved character of ‘Tevye the Milkman.’ When he was only 24 years old, Aleichem published his first story, Tsvey Shteyner (“Two Stones”), and by 1890, he had become a central figure in Yiddish literature. Aleichem was known as the “Jewish Mark Twain” for his similar writing style and pen name usage.

Felder will play Sholem Aleichem himself – giving audiences the true story of what happened ‘Before Fiddler.’

Long before songs like “Tradition,” “If I Were a Rich Man” and “Sunrise, Sunset” first beguiled audiences, there was Klezmer, the music of the Old World; a music that imitated talking, laughing, weeping, and singing, and where musicians didn’t just make music, they spoke to you in song.

In Florence, Italy, one of the oldest artistic centers in the world, a group of musicians have been virtuosos in the world-famous Orchestra of the Maggio Musicale Fiorentino by day (under the baton of  famed conductor Zubin Mehta), and then become the Klezmerata Fiorentina by night. The quartet consists of violinist and violist Igor Polesitsky; clarinetist Riccardo Crocilla; accordionist and bassoonist Francesco Furlanich; and double bass player Riccardo Donati.

Filmed on location where events actually took place, this streaming production will feature the stories and characters of Sholem Aleichem, along with music that is sure to move the soul.

Before Fiddler – Live from Florence is directed by Felder & Stefano DeCarli, with associate direction by Trevor Hay. Production design is by Hershey Felder. Film production and live editing is by the DeCarli Live film company. Live broadcast and sound design production are by Erik Carstensen. Line producer is Annette Nixon. Production and broadcast development is by Meghan Maiya. Costumes and Hair are by Isabelle Gerbe. Scenic construction is directed by Pierre Gerbe. 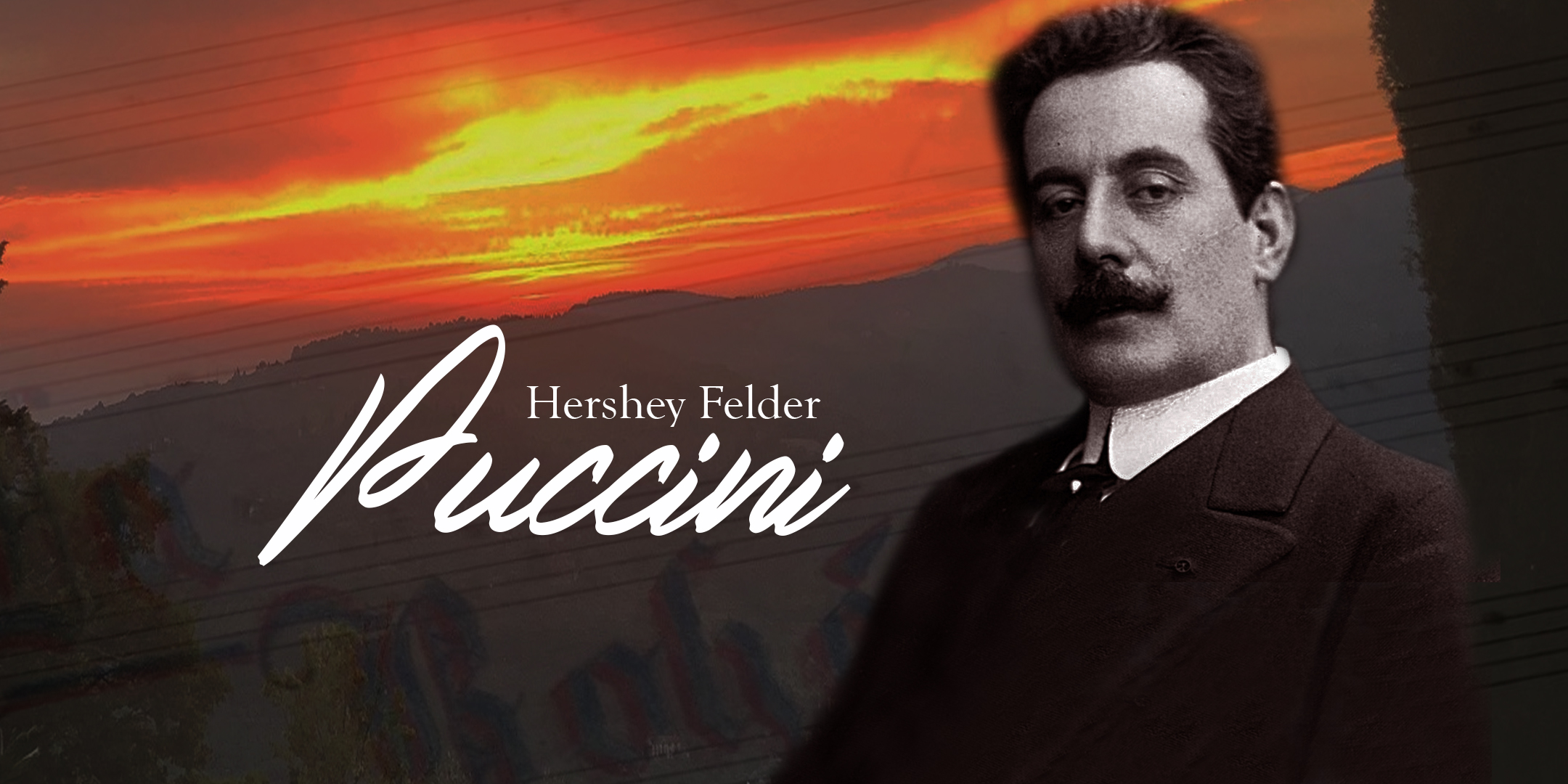 In the tradition of the “one man composer shows” adding operatic voices when called for, PUCCINI is the story of the great composer’s deliciously scandalous life, his female characters, and how the real women in his life affected the women he created on stage. Filmed live on location in the places where these events and these compositions and premieres actually took place, PUCCINI will include music from La Bohème, Tosca, Turandot and more. 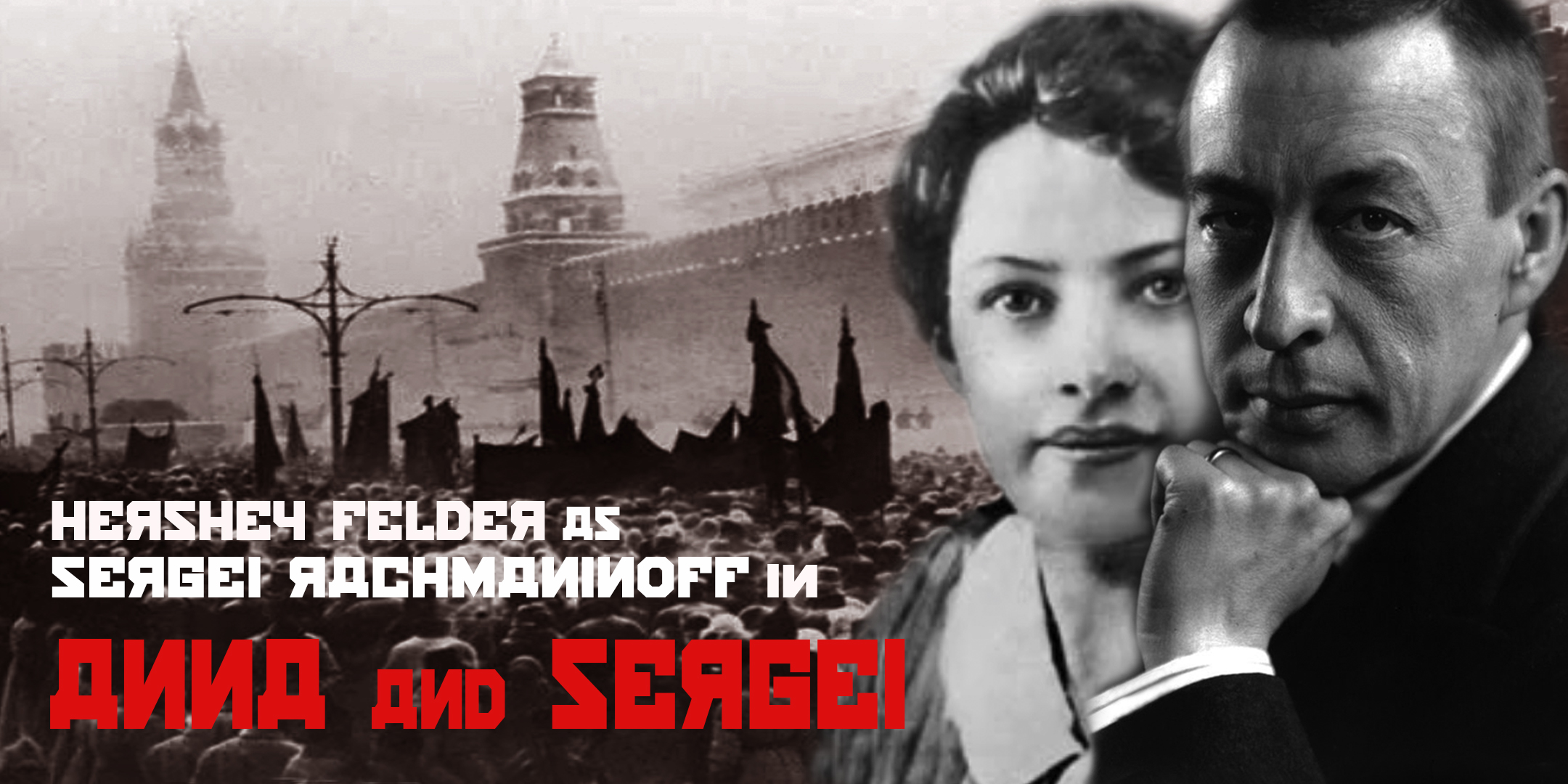 Taking place as a memory play in the house in which the Russian Rachmaninoff died in Beverly Hills, this is the story of a very strange meeting Between Rachmaninoff and Anna Anderson, the woman who claimed to be the sole surviving member of the Romanov Dynasty, the Princess Anastasia. Featuring Rachmaninoff’s most beloved melodies and music. 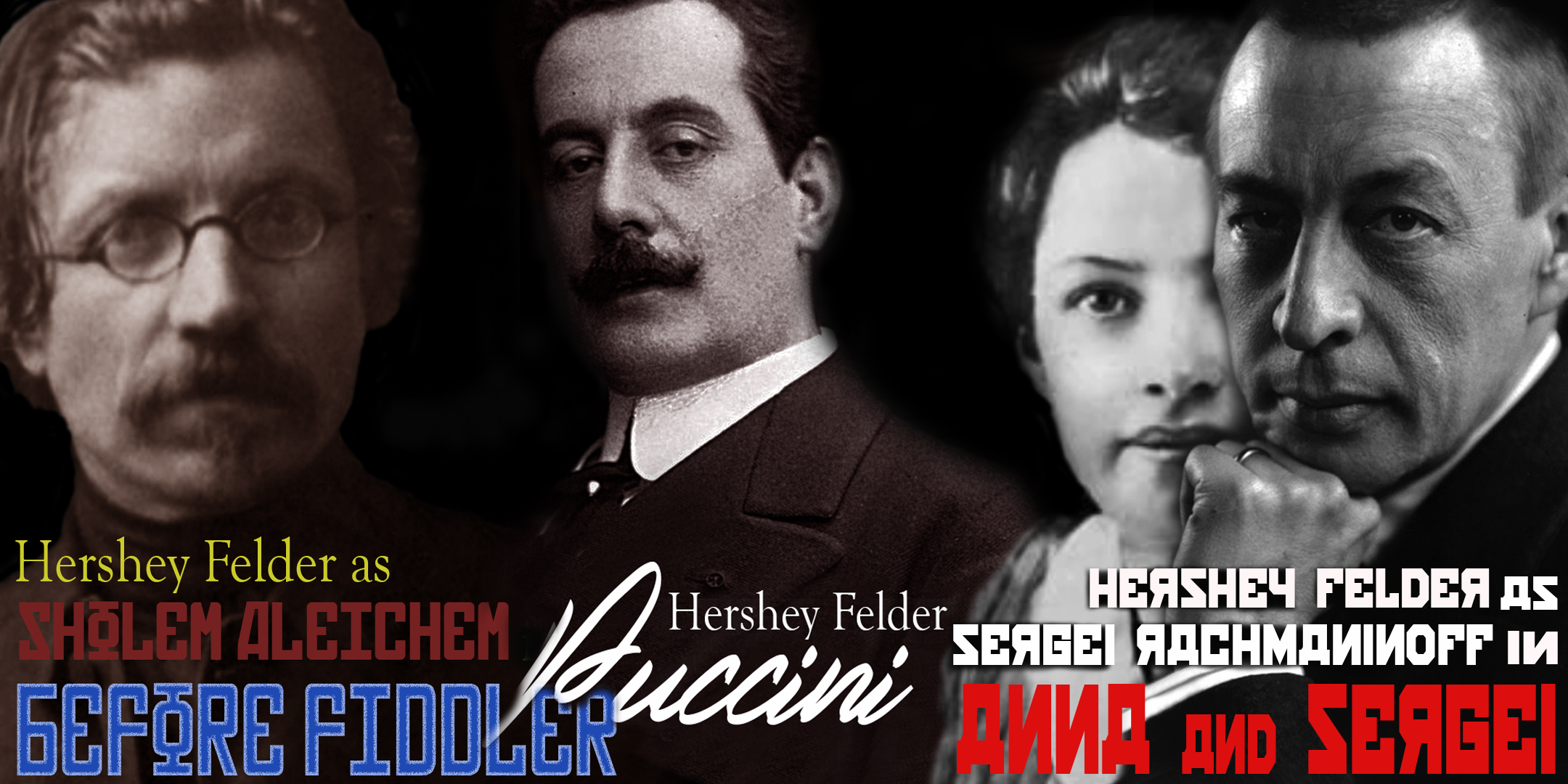 Every show includes the livestream performance and an additional week of on-demand viewing.

Named to Time Magazine’s 2016 Top 10 Plays and Musicals, Hershey Felder has played over 6,000 performances of his self-created solo productions at some of the world’s most prestigious theatres and has broken box office records consistently. American Theatre Magazine has said, “Hershey Felder is in a category all his own.” His shows include: George Gershwin Alone (Broadway’s Helen Hayes Theatre, West End’s Duchess Theatre); Monsieur Chopin; Beethoven; Maestro (Leonard Bernstein); Franz Liszt in Musik, Lincoln: An American Story, Hershey Felder as Irving Berlin, Our Great Tchaikovsky, and A Paris Love Story. His compositions and recordings include Aliyah, Concerto for Piano and Orchestra; Fairytale, a musical; Les Anges de Paris, Suite for Violin and Piano; Song Settings; Saltimbanques for Piano and Orchestra; Etudes Thematiques for Piano; and An American Story for Actor and Orchestra. Hershey is the adaptor, director and designer for the internationally performed play-with-music The Pianist of Willesden Lane with Steinway artist Mona Golabek; producer and designer for the musical Louis and Keely: ‘Live’ at the Sahara, directed by Taylor Hackford; and writer and director for Flying Solo, featuring opera legend Nathan Gunn. Hershey has operated a full-service production company since 2001, and in 2020 created a new brand LIVE FROM FLORENCE, that operates a “theatre at home broadcast company,” based in Florence, Italy. Early broadcasts included; Hershey Felder as IRVING BERLIN; Hershey Felder, BEETHOVEN; Hershey Felder as GEORGE GERSHWIN ALONE; Hershey Felder, BACKSTORY – The Story Behind the Creation of Berlin, Gershwin & Bernstein; Cooking French in Florence with Jeff Thickman & Hershey Felder. The Hershey Felder Presents – Live from Florence 2020-21 Season of broadcasts include: Hershey Felder as Claude Debussy in A PARIS LOVE STORY; Hershey Felder, TCHAIKOVSKY; Hershey Felder as Sholem Aleichem in BEFORE FIDDLER; Hershey Felder, PUCCINI; and Hershey Felder as Sergei Rachmaninoff in ANNA & SERGEI. Hershey has been a scholar-in-residence at Harvard University’s Department of Music and is married to Kim Campbell, the first female Prime Minister of Canada.

How will I receive the livestream link?
Your livestream will be sent to you on the Friday before each show via the email you used to register for this event. If you do not see the email on that Friday, please check your spam folder.

What if the livestream buffers while I am watching?
Don’t worry, you can watch what you missed in the recording later. The recording will be available to you for one full week after the event. For troubleshooting tips, click here.

Additional “How To Watch” Instructions can be found here.

What’s the refund policy?
There are no refunds for this event.

Is my registration fee or ticket transferrable?
No transfers or sharing.

May I give this as a gift or purchase access for multiple households?
Yes, you may gift access to friends and family! To do so, you will need to make a separate purchase for each household and provide a different name and email address associated with that viewing household. The confirmation email will go directly to them.

How do I contact the organizer if I have questions?
You can email events@hersheyfelderpresents.com with questions. The team will get back to you as soon as possible and appreciates for your patience.

How can I find out about other livestreams or recordings offered by Hershey Felder?
Sign up with your email address to receive news and updates here.