Dallas, TX (January 22, 2021) – Dallas Summer Musicals (DSM), in partnership with Broadway Across America (BAA), today announced the revised lineup of Broadway shows coming to Dallas in its next season, including the performance dates for the return engagement of HAMILTON, November 16 – December 5, 2021. DSM also welcomed Texas-based Germania Insurance as the name-in-title sponsor of the 2021-2022 Germania Insurance Broadway Series, presented by DSM.

Season tickets for the revised line-up are available now. For more information, patrons can visit DallasSummerMusicals.org or call 1 (866) 276-4884, from 9 a.m. to 5 p.m., Monday through Friday.

Current and new season subscribers will receive email communication from DSM with additional details, including how, at a future date, they will have priority access to secure their same subscription seats for HAMILTON, and also purchase additional HAMILTON tickets.

Currently, the only way to guarantee a ticket to HAMILTON is to purchase a season ticket to the six-show Germania Insurance Broadway Series which launches in October with the Tony and Grammy Award®-winning true-life musical phenomenon JERSEY BOYS. The series continues with the winner of eight 2019 Tony Awards® including Best Musical, HADESTOWN; a mesmerizing new production of Andrew Lloyd Webber’s JESUS CHRIST SUPERSTAR; the hilarious hit musical from an award-winning creative team, MEAN GIRLS; the 2019 Tony Award®-winning Best Musical Revival OKLAHOMA! as you’ve never seen it before – reimagined for the 21st century; and the Tony®-nominated Best Musical from the producers of The Lion King and Aladdin, Disney’s FROZEN.

OKLAHOMA! and HADESTOWN will be presented by Dallas Summer Musicals at the Winspear Opera House as part of its on-going collaboration with the AT&T Performing Arts Center.

Chronologically, DSM’s first show at the Music Hall will be the previously announced engagement of the Broadway sensation WICKED which is currently available as a season option for subscribers. Single tickets will go on sale at a future date.

COME FROM AWAY has been rescheduled from DSM’s 2019-2020 season to play the Music Hall in 2022, but it is not part of the 2021-2022 six-show season package. Single tickets are currently available for the newly rescheduled dates.

TOOTSIE, previously rescheduled to play in 2021, has been canceled and will no longer be included in the season.

As of January 22, 2021, we have begun the process of contacting all season subscribers and single ticket holders with the revamped season and rescheduled shows. If you are a season subscriber or have purchased a ticket to a canceled or rescheduled show, please check your email for next steps. If you did not receive an email, please contact customerservice@dallassummermusicals.org. CenterStage members can contact the CenterStage hotline at (214) 205-7854. 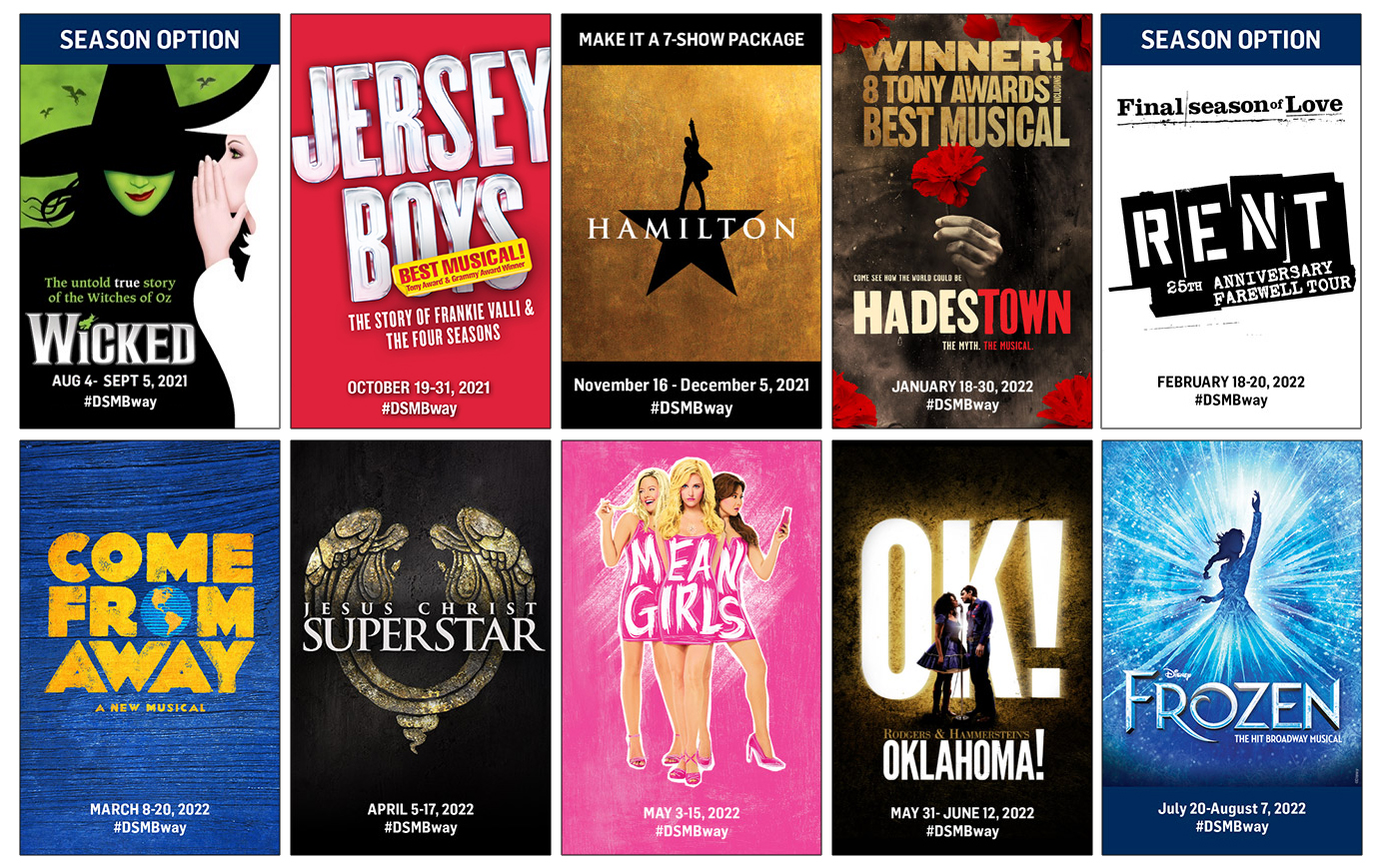 At all times, the comfort, health and safety of our audiences, staff and performers is of the utmost priority to all of us at DSM, especially as it relates to the ongoing COVID-19 pandemic.

We are currently collaborating with health officials and an industrial hygienist on COVID-19 safety protocols to ensure compliance with requirements of relevant government agencies. As our return to the Music Hall approaches, we will publish the protocols in full detail. We will also provide updates on the improvements we have made to Music Hall related to air filtration, incremental cleaning practices, and other aspects of your future visits to the venue.

We look forward to welcoming you back to experience the magic of live Broadway safely and with peace of mind.