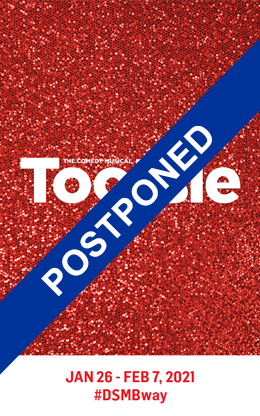 TOOTSIE, originally scheduled for January 26-February 7, 2021, has been postponed and will be rescheduled at a later date. It will still be part of the 20-21 season. We are working diligently to reschedule TOOTSIE to come to Dallas. We will be in touch as soon as we have an update.

It’s “far and away the funniest musical of the season” (Daily News). It’s “the most uproarious new show in years” (The Hollywood Reporter). It’s “the best comedy on Broadway” (Forbes). No matter how you say it, Tootsie is unanimously funny! It’s a laugh-out-loud love letter to the theatre, based on the Oscar®-nominated film. Featuring a Tony®-winning book by Robert Horn and an outrageously clever score by 2018 Tony® winner David Yazbek (The Band’s Visit, Dirty Rotten Scoundrels), this New York Times Critic’s Pick is a “hilarious, thoroughly modern Tootsie” (People Magazine) that’s “even funnier than the movie!” (New York Post). “In these turbulent times, with the world out of balance, we need a place to let the good times roll,” says Rolling Stone, “Tootsie is it.”

“A madly entertaining riot! The kind of big Broadway musical that gives audiences what they came for.” – David Rooney, The Hollywood Reporter

“A triumphant comedy, as outlandishly successful as The Producers!” – Chris Jones, Chicago Tribune

Make the most of your evening and dine at the Crystal Terrace in the Music Hall at Fair Park. Crystal Terrace serves a sumptuous buffet before each performance. Dramatically presented contemporary cuisine. Come share our passion for culinary arts and performing arts. Reservations are highly recommended.

GET RESERVATIONS
This site uses cookies. By continuing to browse the site you agreeing to our use of cookies. Review our cookies information for more details. Find out more.