“The best show of the year. ‘Hello, Dolly!’ must not be missed.” NPR, David Richardson “This ‘Dolly!’ is classic Broadway at its best.” Entertainment Weekly, Maya Stanton “It is, in a word, perfection.” Time Out New York, Adam Feldman 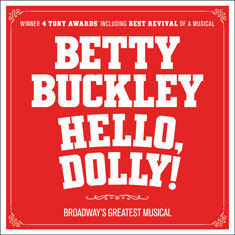 Single tickets for HELLO, DOLLY! start at $25 (pricing subject to change) and are available at DallasSummerMusicals.org or by phone at 800-982-2787. They can also be purchased in person at the Music Hall at Fair Park Box Office Monday through Friday from 10 a.m. to 6 p.m. and Saturday from 10 a.m. to 4 p.m. Orders for groups of ten (10) or more may be placed by calling (214) 426-4768 or emailing Groups@DallasSummerMusicals.org.

HELLO, DOLLY!  began performances on Broadway on March 15, 2017, and officially opened on April 20, 2017. Having broken the record for best first day of ticket sales in Broadway history, the box office record at the Shubert Theatre twelve times, and shattering The Shubert Organization’s all-time record ten times, the production ended its historic Broadway run on August 25, 2018.