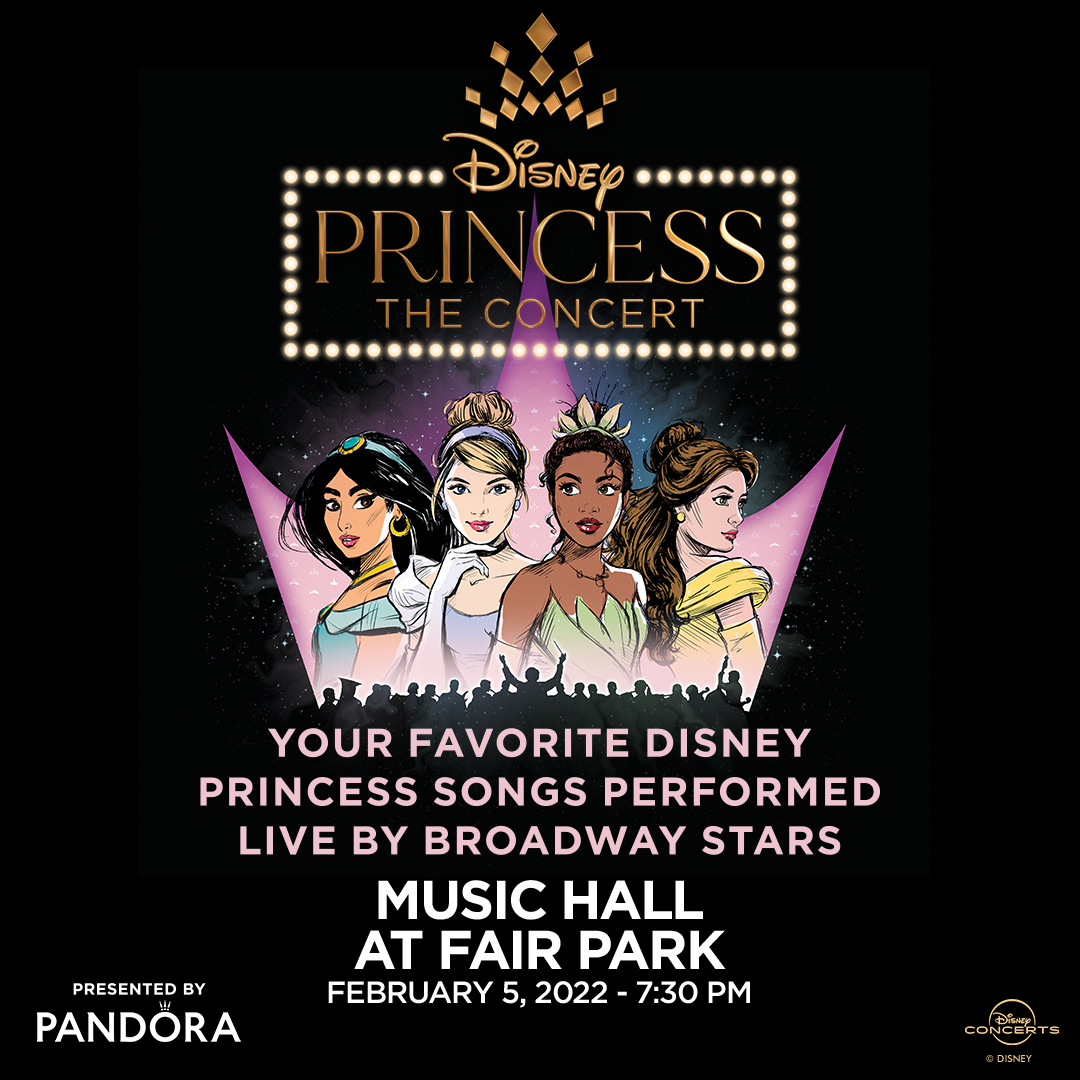 TICKETS GO ON SALE FRIDAY, MAY 7

Dallas, TX (May 3, 2021) – Disney Concerts presents Disney Princess — The Concert, a nationwide tour kicking off November 1, 2021 at the City Auditorium in Macon, GA. “Be our guest” as an all-star quartet of Broadway and animated film icons, their magical Music Director and enchanting Prince celebrate all the Disney Princesses in an unforgettable evening of songs, animation, and stories. Presented by Pandora Jewelry, The Official Charm Bracelet of the Walt Disney World® Resort, tickets and VIP packages for this concert of a lifetime go on sale Friday, May 7 at 10:00 a.m.

Disney Princess — The Concert will come to Dallas and play the Music Hall at Fair Park on February 5, 2022 at 7:30 p.m. Tickets will be available at DallasSummerMusicals.org on Friday, May 7 at 10:00 a.m.

Fans are encouraged to dress up in their best royal attire for an unforgettable evening. Dreams will come true as these acclaimed performers sing over 30 favorite Disney Princess songs, and share their exclusive, hilarious and heartfelt behind-the-scenes stories from their time on the stage and screen.  Larger than life animations and visuals accompanying the music will immerse the audience in pure Disney magic.

Disney Princess – The Concert is based on the established touring production Broadway Princess Party®, which began as a cabaret show at Feinstein’s/54 Below in NYC in 2015. It garnered critical success and a loyal fan base, including over 20 million views on YouTube. This new venture is co-produced by Disney Concerts with Broadway Princess Party, LLC, as led by partners Susan Egan, Laura Osnes, Benjamin Rauhala, and Courtney Reed.

Fans can listen to their favorite Disney Princess songs now on a curated playlist from Walt Disney Records.  For more information and additional cities to be announced, visit DisneyPrincessConcert.com.

About Disney Concerts Disney Concerts is the concert production and licensing division of Disney Music Group, the music arm of The Walt Disney Company.  Disney Concerts produces concerts and tours, and licenses Disney music and visual content to symphony orchestras and presenters on a worldwide basis.  Disney Concerts’ concert packages include a variety of formats, such as “live to picture” film concerts and themed instrumental and vocal compilation concerts, and range from instrumental-only symphonic performances to multimedia productions featuring live vocalists and choir.  Current titles include the Star Wars Film Concert Series (Episodes IV-VIII), Toy Story, Aladdin, The Muppet Christmas Carol, Disney Princess – The Concert, Coco, The Lion King, Up and The Nightmare Before Christmas, which in 2019 accounted for over 900 performances in many of the world’s top concert venues.

About Pandora Pandora designs, manufactures, and markets hand-finished jewelry made from high-quality materials at affordable prices. Pandora jewelry is sold in more than 100 countries through 7,400 points of sale, including more than 2,700 concept stores. Headquartered in Copenhagen, Denmark, Pandora employs 28,000 people worldwide and crafts its jewelry at two LEED certified facilities in Thailand using mainly recycled silver and gold. The company plans to be carbon neutral by 2025 and has joined the Science Based Targets initiative to reduce emissions across its full value chain. Pandora is listed on the Nasdaq Copenhagen stock exchange and generated sales of DKK 21.9 billion (EUR 2.9 billion) in 2019.

About Dallas Summer Musicals Since 1941, the non-profit Dallas Summer Musicals Inc. (DSM) has presented the Best of Broadway to North Texas audiences. Located in the historic Music Hall at Fair Park, DSM promotes excellence in live musical theatre with year-round performances for diverse audiences of all ages, impacting the lives of children and families through education and community outreach programs, while enriching the cultural landscape of North Texas and the Southwest Region.